This is Cougar Country!

Vision Statement: The North Panola School District aspires to be the premier athletic program in our respective classification.

Please review and familiarize yourself with the Spectator Guidelines for the 2019-2020 Athletic Season. 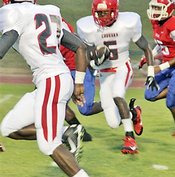 Unity: "In order to have a successful season, each individual must share a unity to the team." ~Vince Lombardi
Individual commitment to a group effort — this is what makes a team work, a company work, a society work, a civilization work!  This means each individual must put the needs of the team above themselves. Everyone on a team has a specific role and no one role is greater than another. Becoming a unified team requires an unselfish attitude, and is a step from independence to interdependence.

Courage: "A man can be as great as he wants to be if you believe in yourself and have courage.” ~Vince Lombardi
The main reason everyone in the United States doesn’t play sports is courage. No other activity brings out courage in an individual as much as sports because of the deliberate physical nature of the games. It’s courage that enables us to overcome obstacles in athletic competitions, as well as in life. The NPHS athletic department will help develop courage on and off the field or court, whether it be taking on a larger opponent or fighting peer pressure and standing up for what you believe in.

Trust:  “You must trust and believe in people or life becomes impossible.” ~Anton Chekhov, Russian playwright
A good athletic team must trust each other unconditionally. You must trust that the guy next to you is going to do his job and trust yourself that you gave your best effort on every play. This trust goes beyond the athletic field. Every NPHS athlete must trust that each member of the team will always reflect the core values of the program.

Scholarship: “Education is not filling a bucket, but lighting a fire.” ~William Butler Yeats, poet
Preparing and practicing for each season is very important, but the main reason you are at NPHS is to attain an education. Scholarship or learning will be emphasized above all other values. Good athletes must have balance, so school must come first. Our regulations require that all student athletes maintain a 2.0 grade-point average. If an NPHS athlete has difficulties in a class or with their GPA, tutoring and study hall will be mandatory.

Respect: Respect“Men are respectable only as they respect.” ~Ralph Waldo Emerson
All NPHS athletes must respect themselves, their teammates and their community. They must — at all times — carry themselves in a manner that is seen in high regard. Respect starts from the individual: Respect yourself and your body in order to gain respect from others. This includes avoiding drugs and alcohol, and not engaging in behavior that could diminish you or your team’s reputation. NPHS athletes are representatives of the program wherever they go; therefore, they must always act in a manner that garners respect from others.

Character: Character“Character is doing the right thing when nobody’s looking.” ~US Army
Someone who has exceptional character follows a moral code in every decision. Throughout every game there are numerous opportunities where one’s character is tested. A player with character respects the opponents and treats them with dignity, no matter what the opponent may be doing. The greatest test of character is how someone responds when he is down. All of these facets will be emphasized on and off the field or court. NPHS athletes will be held to a strong moral and behavioral code and will be expected to carry themselves with dignity at all times.

Hard Work/Diligence: “There are no traffic jams along the extra mile.” ~Roger Staubach
Hard work or diligence is the hallmark of a good program. At NPHS, we will work harder than any program we face. Through diligence, good teams become great teams. Full effort will be the benchmark for performance in the program. Before each game every player should be able to say, “I am prepared for this game because I have worked harder than my opponent.

Commitment: “There’s a difference between interest and commitment. When you're interested in doing something, you do it only when circumstance permits. When you're committed to something, you accept no excuses, only results.” ~Unknown
All good athletic programs require a year-round commitment. A season begins the Monday after the last game of the previous season. If you are not enrolled in another sport, you are expected to be enrolled in post-season activities for the sport you play. Weight-training and off-season conditioning are mandatory for everyone.

Service:  “More bliss can be got from serving others than from merely serving oneself.” ~Sri Sathya Sai Baba, Indian spiritual leader
Service to the community will be a major part of NPHS Athletics. We will provide numerous opportunities to do community service in the name of the program. Some will be mandatory for all members of the team, and some will be voluntary. Any player who participates in the program all four years will easily satisfy the NPHS Community Service requirement.

Pride: “Show class, have pride, and display character. If you do, winning takes care of itself.” ~Paul Bryant, college football coach
We are all fortunate to be part of an amazing community. NPHS has a rich athletic history. Members of the NPHS athletic teams utilize great facilities. All players should exhibit a sense of pride in the program, whether in uniform or out of it. It is our job to behave and maintain a program that members of the program can be proud of.

Excellence: “We are what we repeatedly do. Excellence, then, is not an act, but a habit.” ~Aristotle
All members of the NPHS athletic program should always strive for excellence in everything they do, in sports, in school and in the community. A clear devotion to the 11 Core Values will be the key to excellence on and off the field or court. We as a program will always set high goals and standards for ourselves. We will continue set even higher goals as we attain our initial goals. If we don’t aim our goals to surpass expectations, why have them at all?

It will be the duty of all members of NPHS Athletics to ensure that the  11 Core Values are followed and maintained.